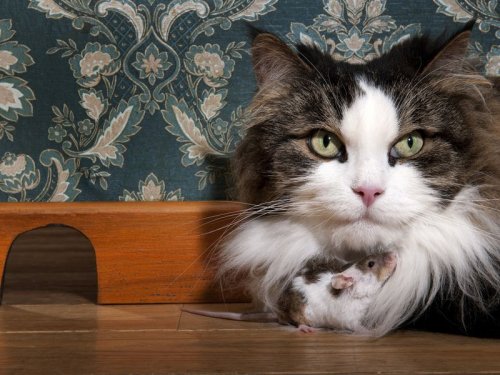 Cats are contradictory creatures. A 2017 study found that domestic felines—deemed one of “the most ubiquitous and environmentally damaging invasive predators on Earth”—have contributed to the extinction of at least 63 global vertebrate species, but new research published in Frontiers in Ecology and Evolution suggests feral cats are embarrassingly ineffective when it comes to catching the prey most commonly associated with their urban jaunts: rats.

Researchers led by Fordham University’s Michael Parsons spent five months observing a rat colony housed at a Brooklyn waste management facility, Matthew Taub reports for Atlas Obscura. Although the team initially set out to study pheromones, or airborne chemicals that can influence animal behavior, they soon shifted focus to rat-cat interactions. The results were surprising, to say the least: Over the course of the 79-day testing period, local cats ambushed just three of the facility’s roughly 150 rat—killing only two.

According to Science News’ Susan Milius, the researchers tracked kills with the help of motion-triggered cameras that recorded 306 “active-animal” videos. Based on these clips, the scientists recorded 20 stalking events and three kill attempts (only two of which were successful). The kills occurred under ambush-like conditions, while the unsuccessful attempt was an open-floor chase.

“[It was a] very hesitant chase, like a stop-and-go dance they do,” Parsons tells Milius. “When the rat stops, the cat stops, too.”

A potential explanation for the felines’ unexpectedly low kill rate is the size and ferocity of city rats, Tanya Loos writes for Cosmos. New York’s infamous brown rats generally weigh around 330 grams, or roughly 10 times the weight of the average mouse. Given the choice between attacking a monstrous rat, a 15-gram bird and a 30-gram mouse, cats tend to opt for the less challenging prey.

Atlas Obscura’s Taub notes that rats sensing an increasing feline presence also change their behavior, scurrying inside and largely keeping out of sight. As the researchers report in their study, a one percent increase in the number of cats on a given day made it 100 times less likely that a rat would trigger the team’s motion-sensitive cameras.

But cats and rats are more likely to ignore or avoid each other than engage in outright conflict, University of Florida disease ecologist Gregory Glass, who was not involved in the study, tells Chen.

“Once that rat hits puberty, [it’s] way too big and nasty for the cat to deal with,” he says. “You can watch a lot of cats and rats accommodating one another, easing by one another, eating out of the same trash bag.”

As Sarah Zhang writes for The Atlantic, introducing feral cats into urban environments can raise a bevy of unintended side effects. Feline feces spreads a disease known as toxoplasmosis, which can cause severe brain damage or even death when transmitted from a pregnant mother to a fetus. Cats are also notorious bird killers—a 2013 study suggested the animals are responsible for the deaths of 2.4 billion birds per year, and that’s just in the United States.

Parsons tells Taub that the key to managing urban rodent populations is waste management, not feral felines. Trash attracts rats, so if less garbage littered the streets of New York and other cities, the rats would essentially moderate themselves.

“People see fewer rats and assume it's because the cats have killed them—whereas it's actually due to the rats changing their behavior," Parsons said in a statement. “The results of our study suggest the benefits of releasing cats are far outweighed by the risks to wildlife."

Pigeon Guano Clean Up And Proofing Job In Gloucester

Rats Are On The Move