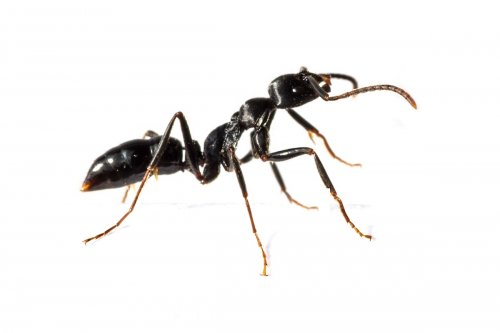 Black ants (Lasius niger) are the ant species that you are most likely to find in your gardens.

Black ants are entirely harmless, like all other Formicine ants they do not have a sting and unlike the wood ants they don’t spray formic acid either. Jaws are the Black ants’ main defence, but they are not strong enough to break someone’s skin.

Black ants eat insects and sugary substances such as nectar and rotting fruit. They are dutiful farmers of aphids, protecting them from predators, collecting the sugary honeydew that they produce, and carrying them around to establish new herds. They probably also take some aphids underground over winter, it is likely that some of these will be eaten!

Black ants are important soil engineers, mixing it up and increasing its fertility.

A Black ant colony will contain just one queen – many other ant species actually have more than one queen in each colony. A fully grown Black ant colony contains the queen and 4,000 to 7,000 female workers, but a big colony may contain 15,000 workers. Only the queen lays eggs, the workers forage for food, feed the larvae and build the nest.

The hardest part of the Black ant life cycle is the job of the young queen in raising the first generation of workers. This is very difficult as she cannot forage for food and has no herds of aphids. The queen shuts herself in a cell underground and when her first eggs hatch she feeds the larvae with a fluid created from the breakdown of her own muscles. By the time the first workers emerge from their pupae the Queen will be terribly weak, having lost about half her body weight. The first role of the workers is to forage food and nurse the queen back into good health.

Two closely related ant species - Lasius mixtus and Lasius umbratus -skip this difficult stage of development. The young queens cheat by infiltrating a Black ant nest and deposing the queen. The invading queen then uses pheromones to control the previous queen’s workers and persuade them to raise her young instead. The Jet ant (Lasius fuliginosus) is a hyperparasite – after a Lasius umbratus queen has taken over a Black ant colony, the Jet ant deposes the Lasius umbratus queen and takes over itself! Click here to visit the Giant aphid hunt page.

Worker ants find food by sending out scouts. When a good source of food is found they lay down a scent trail so that other workers can easily find the food. They have two stomachs, their true stomach and a much larger social stomach that they fill with food to take back to the colony and feed the larvae, builders and the queen.

If the young queen successfully rears the first brood, if she is not deposed by a parasitic ant species, and if her workers find good food sources then her colony will thrive. Only after several years when the colony is fully grown will the queen lay the first eggs that will become drones (males) and queens. On a hot and humid day between June and September the nuptial flight occurs, males and females from many colonies in the area take to the air simultaneously and mate. The new queens then lose their wings and burrow underground to start the cycle again.

While most colonies of small black ants near human habitation will be the Black ant, there are three other very similar species Lasius platythorax, Lasius alienus, Lasius psammophilus, to tell the difference you need to look very hard at their hairiness under a microscope!