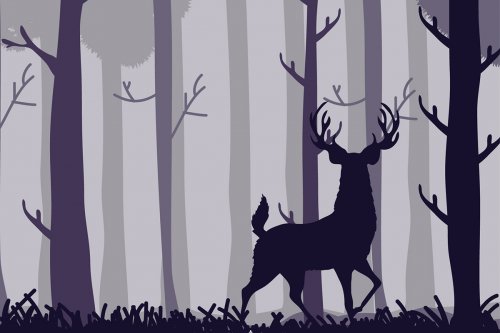 Here is what the Wildlife Conservation Trust Think.

Deer have probably never been so abundant in Britain. The disappearance of large predators such as bear, wolf and lynx, as well as much-reduced hunting by man in recent years, has allowed deer populations to expand. Added to this, in the lowlands modern crops provide abundant food for these herbivores all year round. In some regions numbers of deer are excessive and are having a detrimental effect on the flora and the natural regeneration of woodland.

The Game & Wildlife Conservation Trust regards deer not as pests, but as a significant and often under-utilised game resource. We advise landowners to develop stalking and culling strategies for deer in order to make the best use of this resource and to maintain populations at levels low enough to allow woodland to regenerate and to avoid forestry damage.

Although fallow deer were present some 400,000 years ago in Britain, later glaciations restricted them to the Mediterranean basin whence they have been re-introduced to other parts of Europe. There are no reliable records of them being imported to Britain before the Norman Conquest, after which they were kept widely in parks for both food and ornament. They were also preserved in the wild for hunting, e.g.in Epping forest and the New Forest. Indeed, until 1997, the New Forest Buckhounds were the only surviving pack hunting fallow.

The present feral population owes its existence largely to park escapes. Many parks were broken up in the Civil War (1642) and again in the two World Wars.

Deer farming became fashionable in the 1980's, some farms keeping fallow in preference to other species. Escapes were inevitable, but are not thought to have made an important impact in comparison to the large number already feral in the countryside.

Fallow exhibit extreme flexibility in most aspects of their social organisation. In high-density populations in large woodlands such as the New Forest, males and females plus young live in separate groups, except during the autumn rut. In lower-density populations in agricultural areas, however, mixed-sex groups regularly occur throughout the winter. In common with other ungulates, group size is flexible and influenced by both habitat and season. Fallow deer also exhibit mating systems ranging from non-territorial devence of harems to the development of clusters of tiny mating territories on leks.

The ideal habitat is a mosaic of established broad-leaved woodlands and arable fields. However, fallow make a living in a range of habitats, from commercial conifer plantations to large open agricultural areas with small woodlands. Although primarily grazers, they take a variety of vegetation and, at high densities, may cause considerable damage to forestry and farm crops.

Muntjac Deer www.lauriecampbell.comAt least five species of Muntjac are known, with a distribution from Pakistan to Java and north to mainland China. Two species have been brought to Britain:

Owing to their subtropical origin in Southern China, muntjac are not seasonal breeders. They produce single fawns every seven months, gestation is 210 days and lactation six to eight weeks. Mating follows quickly after parturition. Pelage changes (spring and autumn) and, to some extent, antler growth (most adult bucks are in velvet in early summer) have adapted to the British climate.

Muntjac are territorial and the social unit is a family group with young adults being driven off before the arrival of the next fawn. Males make large scrapes and fray on low branches using their tusks, not their antlers. The tusks are the muntjac's primary weapons, showing its primitive ancestry. Both sexes bark like a small dog at intruders, often continuing for many minutes.

Their preferred foods are ivy, bramble, coppice shoots, flowers and seeds of many plants, also fruit, nuts, dead leaves, fungi and market garden produce. They seem to be primarily animals of dense woodland, although analysis of the occurrence of sightings suggest their habitat preferences are very catholic.

Muntjac are present throughout most of southern and eastern England and they are spreading into Wales. There have also been scattered records in northern England and a few in Scotland. Little is known so far about predation, parasites and disease, but traffic accidents and loose dogs may kill many every year. Severe winter weather may lead to high mortality.

Red Deer www.lauriecampbell.comThe red deer is Britain’s largest native land mammal. Originally a species of the woodland edge, red deer have adapted to an existence in open 'deer forests' of the Scottish Highlands.

More recently they have colonised commercial conifer plantations where they can attain high population densities. There have been laws to protect red deer since Saxon times and because of conservation, primarily for hunting with hounds but latterly for stalking, they have survived in fluctuating numbers through the Middle Ages to modern times.

The main concentrations are now in the Highlands, south-western Scotland and south-western England, with a wide scatter of local herds in many parts of England and Scotland. They are virtually absent from Wales, although further colonisation of commercial forestry there is possible.

Some red deer populations, notably those in the Scottish Highlands and the west of England may be considered native, although with some injections of other strains. Others owe their origins to escapes from parks or to deliberate introductions.

The Scottish herd is estimated to be in the region of 350,000. Between 50,000 and 70,000 red deer culled every year, and in severe winters this may be supplemented by natural mortality. Poaching may add substantially to this figure. No statistics are available for England and Wales.

Roe Deer Eating www.lauriecampbell.comThe roe deer is primarily an animal of mixed and small woodland but it is capable of adapting to a wide variety of habitats. It has colonised the northern conifer forests and have penetrated many towns, making use of gardens, parks and other open spaces where there is food and cover. It may also be seen well out into open farmland.

The Roe deer is a native species which has been present in Britain since at least the Mesolithic period. However, probably because of over-hunting, it became extremely scarce in medieval times and by 1700 it was considered extinct in southern and central England and all of Wales.

It also disappeared in most regions of Scotland except for the northern Highlands. After 1800 there were re-introductions into England and colonies were established in Dorset, Sussex and East Anglia. At the same time, there was a gradual recolonisation of most of northern England and Scotland.

Today, roe deer occur in most of southern England, all of northern England and Scotland, and they are continuing to spread into the midlands and central Wales.

The re-introductions were in response to a vogue for hunting which did not last. Since then roe have been undervalued as a sporting quarry and, as numbers built in the first part of the 20th century, shotgun drives and snaring were the accepted legal means of control.

Deer Acts from 1959 onwards imposed close seasons and limitations on the type and calibres of weapons permitted for deer. Roe stalking as a sport was practised by a few enthusiasts from the late 19th century onwards, but has only become more generally recognised as a method of humane control in the last thirty years.

Sika originate from the Far East and some 13 different races are recognised, many of them endangered in their native countries. Size varies considerably, from the typical Japanese race with a shoulder height of 65-79 centimetres, to the Dybowski sika of Manchuria and Korea which measures about 110 centimetres.

Sika are closely related to red deer and can interbreed with them. In habit they keep more to woodland than red deer. Populations which are subject to distrubance become largely nocturnal.

Most sika in Britain are Japanese in origin and were brought first to Ireland about 1860, to Powerscourt, and thence to a variety of places in England and Scotland. Some were released deliberately, eg in Kintyre, the New Forest, Dorset and Bowland.

The deer at Bowland are thought to have been Manchurian. Others escaped from parks, especially during the two World Wars and established feral populations.

In recent years the sika has extended its range, especially in Scotland. Another colony in Peebles is now expanding northward and eastward. In England sika are to be found in Lancashire and Yorkshire, southern Dorset and the New Forest. In addition, small local populations exist in the vicinity of a several of the parks from which they originally escaped.

Pigeon Guano Clean Up And Proofing Job In Gloucester

Rats Are On The Move